As the end of 2018 approaches, we're looking back at the hectic time around the Clinical and System’s Transformation (CST) project’s first implementation at VCH-Coastal sites.

As physicians and clinical staff got up to speed on the new clinical information system, help came from many directions, including other health organizations. 16 clinicians from PHSA and PHC were seconded to Lions Gate Hospital to support their peers through the transformation – a way of “paying it forward.” By helping out with CST as “peer mentors,” the secondees gained experience and knowledge that will help them when their home sites go live with the new system. These are their stories, along with some words of advice and encouragement for those next in line to go live with CST. 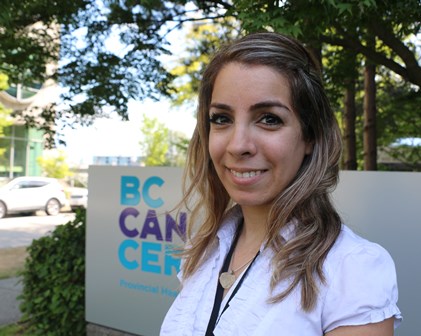 Straight out of school, Afsoun Majidi knew she wanted to be an Oncology nurse. Her Dad had cancer and she wanted to be able to help others through one of the most challenging times of their lives. So, she got a job at BC Cancer. When asked if she thinks she’s made a difference, Afsoun smiles brightly, looks down and responds quietly: “I hope so.”

Making a difference is also why Afsoun agreed to spend three months at Lions Gate Hospital supporting her peers as they adopted a new Cerner clinical information system at the end of April. The changes were introduced as part of the CST project.

“Overall the experience was really good,” she says, adding she’ll be able to help out at BC Cancer when it’s time for it to go live. “The Coastal staff were amazing and really excited to learn this new system and figure out how to play with it and go forward. Of course, there were some glitches, but there was great help whenever we needed it.”

Afsoun found the system easy to use, and daily huddles in the Oncology department allowed staff to bring up any issues or concerns. She says a shared system between VCH, PHSA and PHC is long overdue.

​"Patients might receive treatments at different centres, and we wouldn't know unless there is some kind of documentation. With CST, we'll know the patient's history and what they've received," she says, adding that things will be harder before they get easier. “It’s a huge project and there will definitely be growing pains as it goes live at other sites, but it will benefit patients and clinicians in the end. It’s just getting through the tough part.”

Afsoun’s advice for other sites is simple, but hard to do during those early days: “Be patient.” Using a new system might seem overwhelming and scary at first, but she reminds people to stay positive, breathe, take a step back, and try, try again.

“We’re smart people, we can handle it. We’ll get used to it and we’ll enjoy using it.”

“Just give it time”

Getting seconded to Lions Gate was like an answer to a question Inara Dhanani hadn’t asked out loud. As a Clinical Lead at BC Children’s Hospital, the OR nurse had been looking for a new challenge when she heard about the secondment opportunity at Lions Gate Hospital. She started there a few weeks later.

“I think something above, in the sky, was listening to me that I wanted to try something different,” says Inara, who enjoyed her time on the North Shore, commenting on how supportive the environment was and how staff embraced the major changes to clinical practice that come with CST. “Change can be difficult and challenging. But like anything else in life, you can’t avoid it. Just give it time and it will work well.”

After her secondment at Lions Gate, Inara decided to join the CST team – making the hard transition from the hospital to the office. But she believes in the project’s goals and wants to contribute to its success.

“It’s going to be great for patients,” she says. “All sites across the three health organizations will be able to access the same information. With a click of a button, you know who your patient is. You’re not flipping through the chart wondering where that document is, or not understanding someone’s scribbling.”

Inara is no stranger to big career moves. She’s originally from India, where she had been an accountant. But when she moved to New Zealand, she was going to have to go back to school for four years if she wanted to continue with accounting. She decided to become a nurse instead. And when she moved to Canada in 2010, she started working at BC Children’s – a job she loved.

“Like we always said at Children’s, you require special people to work with children. If you walk into our operating room, you notice the difference. You get that warm, fuzzy feeling,” says Inara, smiling. “Luckily, I get that same feeling at CST, so that’s really great.”

“We’ll look back and wonder how we managed on paper”

St. Paul’s RN Caroline Kim resisted the urge to grab the mouse from the nurses she was helping at Lions Gate Hospital, knowing hands-on training works better than instruction.

“Patience is an asset. In fact, it’s a necessity,” says Caroline, an Acute Medicine nurse who started her secondment at Lions Gate early – four months ahead of go-live. But a few months after implementation, she realized she wasn’t needed anymore. “The nurses I was supporting adapted very well and made my job obsolete only a short time after go-live.”

Working at St. Paul’s, Caroline knew she wanted to be a part of the CST project, and she couldn’t imagine a better way than providing support for her nursing peers.

“It was really neat to get an early look at what’s to come for St. Paul’s Hospital,” she says. “I think it’s a long time coming and in as little time as months down the road, we’ll look back and wonder how we managed on paper.”

Caroline says using the tap-and-go feature on the new computer workstations was a nice touch. With tap-and-go, users only have to enter their network credentials once in a 12-hour period. Logging in and logging out is as easy as tapping one’s employee identification/building access card against a device’s card reader.

Although the project is extremely complex and at times it felt like everyone was flying by the seat of their pants, Caroline says when it came to go-live, everyone came together.

“We had so much support come go-live, there was rarely ever a time when I couldn’t find an answer to a question.”

“I would definitely do it again” 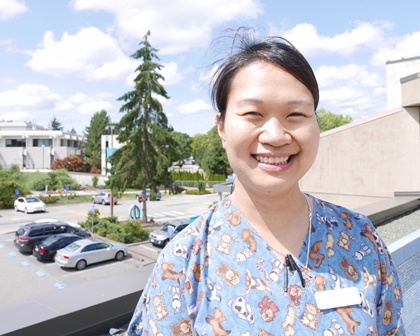 Josephine Liu is the type of person who likes to play around with things and see how they work. She also loves computers. That’s why the Maternity nurse from BC Women’s Hospital got involved during Lions Gate Hospital’s go-live.

“CST is going to happen at BC Women’s at some point, so I thought, ‘Let’s try it and see how it goes,’” says Josephine, who has been an RN since 2004. She started at Lions Gate around three months ahead of go-live before returning to BC Women’s three months afterwards.

There were good moments and bad moments, she says, adding that some people coped well with the changes, while others resisted them. She always tried to see where they were coming from, reassured them that it was okay and helped them give it another shot.

It was a true transformation to see people go from resistance to not needing help.

“To see them at their worst and then two months later, they’re doing so well – to the point where you just see them teaching one another, and giving little tips to each other,” says Josephine, adding with a laugh: “I’m so proud of them!”

After all, she became a nurse to help people. And it holds true at BC Women’s, where she’s spent the past seven years working with women with high-risk pregnancies on the specialized antepartum ward, Evergreen. It’s fitting, then, that Josephine was there when the first newborn baby was entered into the new Cerner system.

“Everyone was so super excited. It was pretty cool seeing the bracelet, and the baby had its own MRN.”

In Josephine’s mind, the benefits of the new clinical information system outweigh the hardships of the learning curve.

“I like the fact that anyone can access a chart anytime. I’m not hunting for a piece of paper, or a chart that someone else has or they left on a desk and didn’t put it back on the chart rack. And all the information is current – things that are really happening – which is really, really nice.”

But would she help out with another go-live? “I would definitely do it again.”