As part of a project called eCare, North York replaced its manual systems with computerized provider order entry (CPOE) and closed loop medication management systems in October 2010. (By April 2011, it became one of only four Canadian hospitals to achieve HIMSS Level 6.) 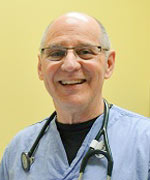 The Clinical & Systems Transformation project is working to emulate North York’s success. “Even though it wasn’t mandatory, their compliance with CPOE was over 90% right off the bat, because providers saw the benefits right away,” says Dr. Bruce Long, former CST Chief Medical Information Officer, VCH. “They also saw an almost simultaneous reduction in adverse events.”

Dr. Long envisions a future for our three Health Organizations that is already a reality at North York. “What really comes home for me,” he says, “is that we can initiate processes to occur in parallel, not in series.”

“Imagine a middle-aged man with severe chest pain in the Emergency Department. I can see on my screen his vital signs, his demographics, his CTAS (triage and acuity) score, the ECG results, and the triage nurse’s notes. I can initiate an order set before I even see the patient.

“I could be walking down the corridor in tandem with an ECG technician, a nurse bringing aspirin, a lab technician – all going straight to the patient because the orders are initiated in parallel.

“At the moment, the orders all go into the patient’s paper chart, which gets physically passed from person to person. He might have waited for an hour. So we’re reducing delay, improving care, and improving outcomes.”

In the Future Practice article, Dr. Jeremy Theal, North York’s Chief Medical Information Officer, explains that patient safety and patient-centred care were the reasons behind eCare. He describes how they developed, tested and introduced standardized order sets in a way that worked for physicians and clinical staff. He also lists some of the improvements seen after one year of CPOE, including medication turnaround time and mortality rates; and the factors that were instrumental to the success of eCare.

CST is aiming for HIMSS Level 5 for all acute inpatient and outpatient departments across VCH, PHC and PHSA.

If you have questions or feedback, please email info@CSTproject.ca